Karl, an artist aged 48 and now based in New Zealand, was treated by Peter Bullock for a benign brain tumour when he was 38.

What and when were the first signs of your illness?

I got blurry vision, but it wasn’t like I needed glasses – it happened really fast. I was on holiday and I suddenly realised I couldn’t read the road signs.

How was it diagnosed, and by whom?

I was living near Moorfields Eye Hospital at the time, so I went there first, and they just said I needed glasses. So I saw an optometrist and she tried everything and then said there was something wrong and I needed to see a specialist. Then various specialists put me through a bunch of tests – I couldn’t believe how many parts of the eye there were specialists for – and finally I had a brain scan and that showed a benign brain tumour – a craniopharyngioma.

How did you come to Mr Bullock?

I was referred by the eye specialist who did the brain scan.

What has your treatment involved and how long did it take?

I had an operation at King’s College Hospital to remove the tumour and that went fine, but a year later, I got blurry vision again – I was one of those slightly unfortunate people – and a scan showed it had grown back. So I had it removed again and then about three months later, back it came again. So this time, they went in harder and really scraped it out. I did freak out a bit that time, I must admit, as my tumour was very close to my eyes and they had to kind of lift up my brain to get to it. I’ve got a few pins I can feel in my head from that last operation – they went in from outside – but I don’t know too many grisly details – you don’t need to know too much, you know!

What has been the outcome?

Well, it’s eight years since my last operation and I’m fine. I did have to have radiotherapy afterwards, at Bart’s, but I’d just have my radiotherapy in the morning and then I was free for the day, so I’d sneak out for a coffee with my wife. In terms of permanent effects, my pituitary gland was destroyed by the radiotherapy, so I have to take hormone replacements, and I’ve also lost my sense of smell, but that’s OK – if you’re going to lose a sense, that’s the one to lose!

The main thing is, I can still paint. People said to me: “What a terrible thing if you couldn’t paint anymore,” which for an artist is very true. When I visited London a few years ago, I took all my surgeons prints – the ENT surgeon, the radiation guy and Mr Bullock.

How have you found your time as a patient with Mr Bullock?

He’s a fantastic person. I really enjoyed working with him: he has a great sense of humour. You really feel kind of in love with your surgeons, I think. I had great confidence that I was under his care, and he’d have no problems at all. I also really enjoyed being in hospital. When I went in for surgery, they had JazzFM on, which I thought was brilliant – it’s what I listen to when I’m working.

When you get a certain sort of illness, the best place to be in the world is in London – the breadth of expertise is phenomenal. With Peter Bullock, I thought, he’s the best guy in the world to be doing this. 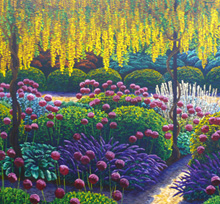 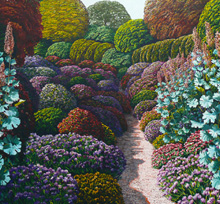 We try to answer your questions, put your mind at ease and make the whole process as comfortable as possible for you